Ruby on Rails editors for Windows

I’ve recently started learning Ruby and naturally one of the first things I needed to do was to find a good development environment. Notepad2 is great for Hello World applications but for anything more complex it becomes a bit painful. So I began my search for the best Ruby (and Rails) development environment I could find on Windows.

Of course it’s important to define what I mean by “best”. My criteria for the best Ruby/Rails development environment on Windows are:

I should point out that at this stage, what I really wanted was TextMate for Windows. I would have quickly handed over the $60 or so for it without looking any further if only there was a Windows version.

Here’s a quick summary of what I tried: 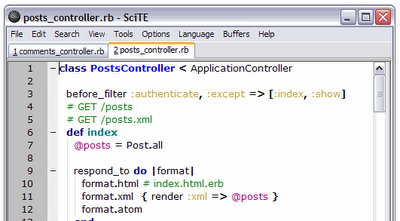 SciTE - included with the Ruby One-Click Installer for Windows. It’s simple and fast but lacks project support and has that Windows 2000 MFC look to it.

InType - nice UI, looks very promising but it’s only Alpha status and development progress seems slow and a bit secretive (apparently, testing is limited to an exclusive “shadow community”). I’ll keep an eye on this one though.

These are some more complete IDEs which all seem to be based on Eclipse. My main complaint with these is the same - they’re all suffer from that enterprise-iness that seems to inflict a lot of Java applications.

Oh yeah, and they’re slow. An application that takes 60-90 seconds to just to load is an application I’m going to feel pretty good about uninstalling. Not to mention the dynamic intellisense stuff that goes on why I’m working and freezes the UI for a couple of seconds while I’m typing.

Aptana RadRails - I first heard of this IDE plugin after Rob Conery posted his VibrantInk theme for it. I had to switch to a nightly build straight away because of a warning about “Identical code structures” which I couldn’t set to ignore. Also note the warning about incorrect spelling of “posts” in the screen shot above. There are a ton of other “helpful” features like this which became annoying so fast that I didn’t even get around to installing Rob’s theme.

NetBeans - there is a Ruby-specific download of this IDE and the UI looks a lot more streamlined than RadRails. If only it didn’t take so long to load and feel so sluggish I would have spent a bit more time on this. When I started looking at customising the fonts and colours, I couldn’t get Consolas to stop looking ugly which was disappointing.

What I didn’t try

There are a couple of applications which I didn’t get around to trying but might be worth a look.

E Text Editor - or simply ‘e’ to its friends, this is the closest thing to TextMate on Windows you can get. There’s one big catch though - it requires cygwin to use TextMate bundles. The way they market this is “The power of UNIX at your fingertips”. I’ve played with Ubuntu, Fedora, SUSE and other Linux distributions and that was fun. But I’m on Windows now and I want something that was designed to work with that OS. According to Wikipedia, a new beta of e allows running TextMate bundles natively in Windows - I’m looking forward to it. JetBrains Ruby Mine - from the people that brought you ReSharper. The ReSharper credentials would definitely appeal to some, but I find that plugin gets in the way more than anything so I feared the same from Ruby Mine - perhaps unfairly. Also it’s $99 and it looks like another Eclipse-like IDE, which I was a bit sick of by this stage.

RubyDotNet VS integration - started by QUT (in my home town of Brisbane - go Brisbane!). It looks to be a bit abandoned at this point so I didn’t get around to trying it. 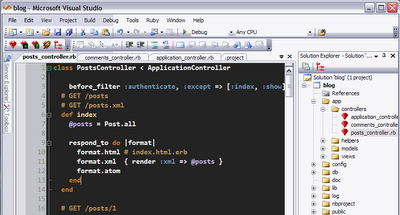 Finally, I ended up going with Ruby in Steel, Text Edition (above). It’s snappy, theming is customisable enough and the UI is simple and responsive.

You can install the text edition without a Visual Studio license (it can use the Visual Studio 2008 Shell which is freely distributable) so you can get this running for as little as $49. There is a developer edition available for $199, but the Text edition is more than enough for me.

The installation is a bit rough around the edges, but once you get it installed it flies along in the VS 2008 shell.